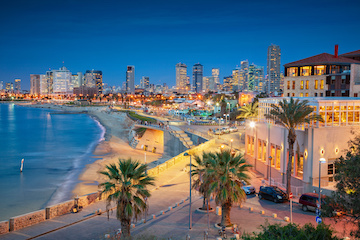 What happens when a city embraces the capabilities that technology has to offer? What leads to cities choosing to make tech a central focus? Let’s explore some cities that the technological revolution has changed.

How does a city go from

There are many reasons, but I would like to talk about one. Technology.

Tel Aviv was founded in 1909 by a group of Jewish settlers that had been living in a nearby (ancient) city. The original settlers were middle-class immigrants (mostly) from western Europe and North America. After WWII ended, many Jews that had survived the holocaust left Europe to go to Palestine. After successfully defending itself in their war of independence, Tel Aviv became the internationally recognized de facto capital as it was the largest city in the country (Jerusalem was split between Transjordan in Israel) and the location of the largest international airport in the country.

Because Israel was a British protectorate, English had been an official language; however, it was removed in 1948, but later became mandatory in education in 1980. The country made a concerted effort to open up the economy to international trade (although English is quite common, there is a preference towards Hebrew or Arabic in day to day life).

The first successful tech company, ECI Telecom Ltd (Electronics Corporation of Israel), was founded in 1961 specializing in networking (specifically in wiring telephone networks). It was followed by Tadiran which focused on component development and manufacturing and Elron Electronic Industries focusing on medical and electronic measurement instruments. Around the same time that these three companies were entering into the high-tech world, IBM and Motorola opened operations in the country.

These companies were the start of a slow trickle of development in Israel, with its tech industry growing slowly over the next 30 years. In 1984, the Knesset (Parliament) passed a law to encourage development in the scientific and technological fields. The next year, the first venture capital firm opened in the country. By 1993, the industry had grown enough for the Knesset to establish a dedicated venture capital fund, Yomza, to assist tech startups. Within four years, the fund was paid back, with interest, and privatized. Since that first fund was founded with $100 million, 309 funds have raised the amount to $25.2 billion focused in tech development.

In 1948, Israel was founded and immediately went to war. All throughout the war, and after, Israel faced severe austerity as the population doubled in less than four years. There were tight government controls over almost every sector of the economy while they experienced one of the fastest historical growths in GDP. By 1960, the measures were released with the annual GDP at $2.599B US.

With the consistent investment, both foreign and domestic, as well as aid (mostly from the US) their economy continued to grow. They had opened up to foreign trade and survived the oil crisis of the 70’s reaching a GDP of $24.155B US by 1980 when their tech industry took off. Now their GDP is $353.268 US 2017.

Capital of the Startup Nation

Israel has the highest concentration of start-ups (per capita) in the world, with 1 for every 1400 people in industries from Agriculture and Financial Tech to Pharmaceuticals and Cyber-Security. The tech industry, as a whole, leads the world with 4.9% of the country’s GDP dedicated to it. With the greatest concentration being in Haifa (239), Jerusalem (389), and Tel Aviv (1937) (For reference, there are 2017 tech companies in Silicon Valley).

Part of this can be ascribed to the mandatory military service which allows for collaborative teamwork, lacks a set hierarchy, and is goal-oriented. Or it could be the fact that the average age of the city is 35. But really the universities, with roughly 65,000 students are the core reason. This has created a haven for tech-related fields to have a huge impact.

Unsurprisingly, in the greater Tel Aviv-Yafo area, English is the second language of most residents. This has a cause and effect relationship with their embrace of technology. The default language for most programming is in English, as are the textbooks and tutorials. This industry dependence on English promotes more residents to learn it, which draws in more international immigration, leading to more English and non-Hebrew/Arabic speakers, so more residents speak English for business, etc., etc. etc.

Why Get Into Tech?

Many people have asked this question. Well, there is a pretty simple answer. Resources. Israel doesn’t have any. There is very limited arable land in the country, so they want to make sure they use it for farming as much as possible. They don’t have oil or minerals to mine. What they do have in Israel is a very well-educated and community-based workforce. Tel Aviv is the nexus of that culture.

This highly educated workforce needed something to improve their economy. With the fall of the Soviet Union, there was a large influx of well-trained engineers desperate for work. The tech explosion that had started a decade earlier was a near perfect fit. With strong cultural and political connections with the United States, who provided a healthy injection of investment, the solution was obvious for many. Since software is more about capabilities, many tech companies saw jumped at the opportunity that this presented.

Do you enjoy knowing the fastest route by public transportation? Would you like to pay for a parking meter with your phone? What about better-timed traffic lights? How would you feel if you could charge your phone on a park bench? All of these are initiatives that smart cities are embracing. Tel-Aviv Yafo won first place at the 2014 World Smart City Awards.

Not only has Tel Aviv started implementing all of these, but they are developing more. The city is working with both major tech companies and startups to make life better for all of the residents, visitors, and tourists. Other cities like Paris, Santiago, and New York around the world are embracing the possibilities for tech to improve life.


The next city we will cover, Singapore, has shown similar rapid growth in an amazingly short period of time. Part of their rapid economic success is due to the merging of finance and technology. Joining Invoice Home is a step in the same direction of the people and culture of these two cities.