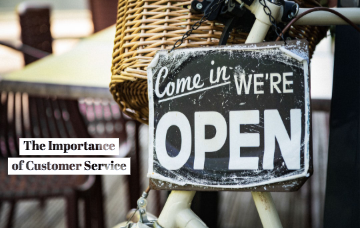 Customer Service goes beyond just a smile and pleasantries, customer service shows appreciation for those who choose to do business with you. Reviews and social media are becoming more important than ever. Companies have had their reputation significantly damaged with inappropriate commercials and hurtful reviews. However, going viral, for the right reasons, can help your business and your reputation. Let’s look at some of the businesses that saw an opportunity to help and prioritized their customers in a BIG way.

Creating a positive environment for all your customers requires hard work and dedication from your employees, and that’s exactly what one of the baristas at the Leesburg, Virginia locations did for one of the regulars. Ibby Piracha is deaf and was used to typing his order onto his phone to show the barista, that was until one day he was handed a note that said “I’ve been learning ASL just so you can have the same experience as everyone else”. Shortly after, a representative from Starbucks’ corporate office said the company is proud that the employee is “taking this initiative to learn American Sign Language.” Putting in the effort to make your customers feel comfortable shows that a company is dedicated and appreciative of those who choose to do business with them.

After a particularly harsh snowstorm in Pennsylvania left an 89-year-old man unable to leave his home, his concerned daughter desperately called several stores to deliver groceries to her father. Although Trader Joe’s doesn’t normally do delivery, they knew what they had to do when they got this call. Not only did they make the trek through a snowstorm to deliver his groceries (including their own team’s suggestions for his low sodium diet), but did it all free of charge. Talk about going above and beyond! This is a great example of employees focusing on the community and doing the right thing.

Listening to your customers is a very crucial part of customer service as they often have valuable insights from using your product or service every day. This is exactly what Sainsbury’s did when they received a letter from a very unexpected sender. 3-year-old Lily Robinson wrote the supermarket to suggest a name change of their “Tiger Bread” to “Giraffe Bread,” since the baking design on top more closely resembles a giraffe than a tiger. Shortly after, Sainsbury's realized that Lily was right and officially changed the name, proving that listening to your customers is a vital part of customer service.

With over 48 million views on YouTube and many, many happy hearts, WestJet made a very positive impact on their travelers during the 2013 Christmas season. They created an interactive device that allowed users to scan their boarding pass and talk to Santa Claus on the screen. Santa asked the passengers what they were hoping to receive under the tree this year. As the flyers talked about their Christmas wish, the WestJet employees got to work. They hand-picked exactly what the customers had wished for, so when the passengers arrived at their final destination, the gifts were waiting for them at baggage claim as an early Christmas surprise."Although flying during peak season can be stressful, WestJet was able to turn what is sometimes a very stressful time into one full of cheer while simultaneously proving their loyalty and appreciation to their customers.


Customer service is one of the most important parts of owning a business. Your company’s goals focus on customers and that should be reflected in the service you provide. No matter the nature of your work, it can’t be done without clients coming in, and it’s important they remain your priority. It doesn’t take millions of views for your customers to know when you care. Sometimes it’s the little things that lead to return business and those positive word-of-mouth recommendations.