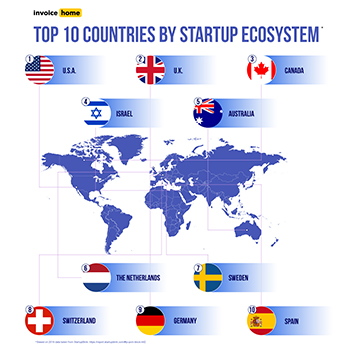 StartupBlink’s yearly report on Startup Ecosystems around the globe was released for 2019. This report uses special algorithms and data points to rank over 100 countries around the globe and illustrate where startup founders can expect to find the best support from like-minded entrepreneurs, infrastructure, governments and much more.

Without further ado, here are the top 10 countries by startup ecosystem according to StartupBlink’s 2019 report:

The UK’s startup ecosystem comes in second, though almost all existing startups, and startup infrastructure, is centered around the capital city: London. London is a great startup city with some highly influential startups, such as Revolut, Transferwise, Deliveroo, and BenevolentAI.

Being one of the most important financial cities in the world, and home to the London Stock Exchange, has allowed Britain to develop into one of the top startup ecosystems worldwide.

Coming in at number three, Canada has quite a diverse and robust startup ecosystem as well. Home to companies such as HootSuite, Shopify, 500px, Corel, and OpenText; most tech startups and companies have come out of big cities like Toronto, Montreal and Vancouver. However, medium-sized cities such as Ottawa and Waterloo (both in the province of Ontario) also have quite large startup ecosystems.

The first non-native English-speaking country on the list is Israel. Israel has a very developed startup ecosystem largely centred around the city of Tel Aviv. Israel hosts offices of many multinational corporations and has a highly skilled labor-pool. Many world-renowned tech companies have come out of Israel in recent years such as Waze, Wix, Monday.com and Viber.

Australia is the least-populated English-speaking country on the list, and the fourth in the top 5. Australia has a creative and entrepreneurial spirit, home to companies such as Canva, Biteable and 99Designs. Startup ecosystems exist in most major cities down under like Sydney, Melbourne, Brisbane and Perth.

Despite the fact that more than 90% of Dutch people can speak English, The Netherlands is officially the first non-English-speaking country in Europe to make the list. Being such a small country geographically, the Dutch startup ecosystem is largely centered around its largest city, Amsterdam. Here you can find the headquarters of innovative tech companies like Booking.com, Bynder, and Adyen to name a few.

Sweden boasts many corporate household names such as Ikea, Volvo and H&M. However, in recent years, the Swedes have been able to add two additional names to that list: Skype and Spotify. StartupBlink notes that the Swedish government has been instrumental in supporting tech startups, developing Stockholm into the home of the second-most unicorns (companies with a $1-billion or more valuation) per capita after Silicon Valley.

Since the country is part German-speaking, part French-speaking, and part Italian-speaking, this makes Switzerland a diverse home for startups that easily opens itself up to larger neighboring European markets. Startup ecosystems exist and thrive in cities like Zurich, Geneva, and Lausanne, with up-and-coming tech names like ProtonMail, Acronis, and Numbrs, calling these cities home.

Germany is home to the largest population in the European Union and the biggest economy in Europe. While many of us know some of the large multinational corporations from Germany, the German government has also managed to lend support to building a great startup ecosystem, particularly in and around the capital of Berlin.
Companies like HelloFresh, SoundCloud, and ResearchGate have all come out of the commendable German startup ecosystem.

Barcelona and Madrid are home to the biggest startup ecosystems in Spain. Spain rose four spots to number 10 on this list since StartupBlink’s last report in 2017. With companies like Carto, Sherpa.ai and Wallapop leading the way for future Spanish tech companies, watch out as Spain continues to ascend this list in the years to come!

For more information, the 2019 StartupBlink report can be found here. Many thanks to them for publishing this report and for giving us some insightful metrics to measure startup ecosystems across countries around the world.